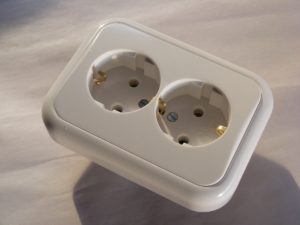 A GFCI, or ground fault circuit interrupter, works as a safety device by shutting off quickly when it detects a short circuit or ground fault. Normal electrical flow will occur when current comes through a hot wire and goes back to a neutral wire. If the GFCI detects that there is an electrical flow occurring beyond that, it will trip automatically. This means it will stop electricity from flowing through water or a human being and prevent electrocution. These tend to be more expensive than other outlets that do not have this safety feature. However, they are required in kitchens and bathrooms, where water is present and electrocution is more likely to occur.

An AFCI, or arc fault circuit interrupter, is another type of electrical outlet that works as a safety device by offering protection from arcs that occur when electricity jumps from one wire to another. These are installed at the circuit breaker box and are required in any modern house or structure built after 1999. If you live in an older house, there is no requirement to have your electrical system updated so it includes AFCI outlets. However, you may consider adding them for increased protection. If you install them at the beginning of every circuit, it will protect all the succeeding outlets.

With a constant need for power, it’s probably no surprise that there are circuits and outlets like the 20A variety which are designed for more power hungry devices. These outlets can support 25% more load than most other outlets without breaker tripping. They are commonly found in kitchens, laundry rooms and garages, where larger appliances are typically located. 20A outlets are identifiable by a small notch that is added to the left side prong opening.

A switched outlet features its own switch on top of it which can be useful for a device or appliance that you don’t want running all the time. You can switch it on or off whenever you want. You can use a switched outlet to create a switched extension cord, so the cord will always have power but there will be a second outlet that’s controlled by the switch.

As the technology advances every day, it is no wonder that outlets are being made with USB outlets in them. These eliminate the need for wall chargers by providing an outlet where USB cables can be put in directly. Unfortunately, these outlets are rarely a standard in the electrical systems in modern homes. However, they are fairly easy to install.

USB outlets come in several designs and varieties. The most common have two regular outlet receptacles with two USB ports on either side of the outlets. Others have only the two USB ports. These outlets will charge your devices up to 4 amps.

USB outlets may be great for those of us who are tech savvy, but smart outlets are types of electrical outlets that take it to a whole other level. They’re like regular outlets but they can be controlled from almost any location via your smart phone. Some of them work when plugged in a regular outlet. Others can completely replace the existing receptacles, although these require a smart home hub. 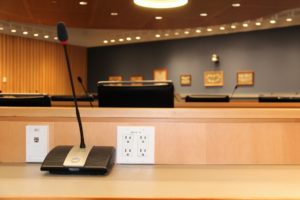 The 120 V power outlet is a standard electrical outlet that has been in use in homes in North America since the 1950’s. It is characterized by its three holes which consist of two narrow slots, one which will be connected to a “live” wire, another to a neutral wire. There is also a round hole for the ground wire. Most outlets will have places to plug in two electrical devices. They are suitable to run devices in the range of 110 to 125 volts.

These receptacles can handle a higher voltage and are typically used to power large, motor driven appliances more efficiently. 120/240 receptacles once featured three prongs but are now more commonly seen with four prongs. The three prongs are meant to contain two live wires and one neutral but the fourth prong was added for grounding, providing additional safety against electrical shock

These can provide power for both 120 and 240 volts. They feature four plug in slots, two that are hot, one that is neutral and one for grounding. Before making a purchase, it is a good idea to inspect the plug to determine the amperage requirement of the appliance you intend to plug into the outlet to make sure it’s compatible. Some styles will mount directly onto a surface while others are recessed into a wall.

Update your Electrical Outlets according to Your Needs

So, as you can see, there are many different types of electrical outlets, all of which can come in handy for any number of situations. To determine which type you might want to install, think about the type of application in which they will be used. Will you be using power tools? Heavy duty appliances? Lots of technology? Clearly you have many options to consider. Whatever your choice, always make sure that outlets and all electrical devices are installed with safety in mind and, if in doubt, call in trained professionals. Good luck running your appliances and devices in a safe and convenient fashion.